Football is the true American sport. For some reason everyone says it is Baseball, but anyone from the United States knows the most patriotic sport is American Football. I mean shit you even have to say “American” in the title. Even though the United states are only 1/6th of North and South America. I’ve gotten away from myself. Here are the 5 best movies about Football.

The Little Giants holds a special place in my heart. It perfectly portrays the spirit of football, the spirit of the American dream. The underdog story is a staple in sports movies. This is literally a movie about a cast of kids that wanted the chance at glory but was never given the opportunity. The outcasts of kids form The Giants, coached by Rick Moranis, and an unlikely football team of rejects. They suck, and really deserve no place in the league. But this movie shows that no matter what, the hard work and spirit pay off. The final game is versus the pinnacle of perfection Cowboys, coached by Ed O’Neill, to prove that you do not need to win the championship just to be winners. This movie makes the list because it taught the life lesson “you only need to win one time.”

You cannot talk about football movies and not include the classic, Rudy. As mentioned before, the best football movies often portrait an underdog. The thing that sets Rudy above most is that the film is based on a true story. Sean Astin plays the real person, Daniel “Rudy” Reuttiger. He was a 5’6″, 165 pound kid who dreamed of playing on the Notre Dame Irish college football team. Not only was his size an issue, but the kid had dyslexia and multiple issues at home. However the theme of football movies always play out rewarding the dreamers. Rudy makes the list because it shows that no matter where you come from, with enough work, an support from family and friends, you can accomplish anything.

This movie does not make you feel good. This is not about an underdog story or a rag tag group of good natured people. This movie shows the dark side of Football Fandom. The movie literally starts by showing a dirt poor town that looks almost 3rd world (actually Texas) followed by a pristine and expensive football field for highschool. The football players are shown as borderline tortured souls, whom are forced to carry an extreme amount of pressure. Lucas Black, Gerrett Hedlund, and Derek Luke all give the performances of their careers in this film. When winning at football is all you have in life, what happens when that is robbed from you. This movie makes the list because it is just a plain great film, but also because it shows the corrupt sense of overbearing parents and society that goes into the sport.

There are so many reasons to love this movie. The cast is amazing, Keanu Reeves and Gene Hackman are the main characters but the whole film features a plethora of amazing actors. There are musical numbers, hilarious jokes, and humbling moments of redemption. There’s social and political commentary, a complex look at the destructive nature of football players, and sexy cheerleaders basically stripping to distract players. The Replacements is equal parts funny and heroic. A viewer would think the plot of a football player’s strike is fictitious, but do not forget that has actually happened multiple times in the NHL. This movie makes the list because I can literally sit down and watch it whenever it crops up on TV, and “pain heals, chicks dig scars, and glory… lasts forever.” 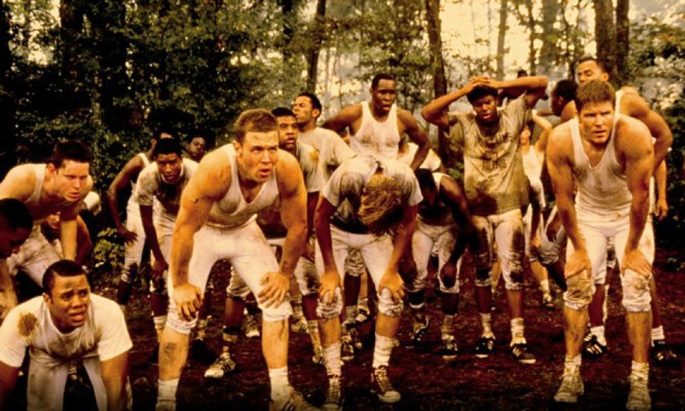 I do not think Remember the Titans is just the best Football movie of all time. I legitimately think this is one of the greatest movies of all times, period. If you do not tear up during parts of this movie, you might not have a soul. The old coach, played by Will Patton, is replaced by Denzel Washington while in a moment of extreme tension, that period of American history called The Civil Rights Movement. The parts of this movie addressing these race related issues are a huge part of what makes this a great film; ultimately capitalized by a scene at the graveyard of the battle of Gettysburg. The football scenes of the movie however, are the greatest. Two separate teams are forced to learn to work with each other, resulting in one of the greatest football records of all time. Also worth mentioning is the fact that this film has one of the greatest soundtrack in cinema history. Oh, I might have forgotten that this was based on a true story. A fact that amplifies the awesomeness of this film. Remember the Titans is a movie about more then just football, while at the same time solidifying the perfect aspects of sports films. The Titans are the underdogs because of their personal history, and at the same time are the heroes we all strive to be.

Bonus: Any Given Sunday

I’ve never actually seen Any Given Sunday. I felt that i should only make a list based off the movies I have watched. That’s honesty right? I’m sure there were tons of movies left off this list that you personally loved, but I just didn’t, or have ever seen. The reason I am including this film as a bonus is because I asked multiple people about “the best football movies” and Any Given Sunday was in every single person’s list. I feel like it must be a great movie. I personally plan on watching it sometime in the future. I did decide to at least listen to the speech Al Pacino gives, and it was inspirational. Living and dying is decided by inches.